June 24, 2022 – Spearmint Resources Inc. (CSE: SPMT) (OTC Pink: SPMTF) (FSE: A2AHL5) (the “Company” or “Spearmint”) is pleased to announce that the Company has received the drill permit from the Government of Newfoundland and Labrador Mineral Lands Division to conduct the maiden exploration drill program on the 100-percent owned “Goose Gold Project” directly bordering New Found Gold Corp.’s (NFGC-NYSE) (NFG-TSX.V) Queensway project in Newfoundland (see map below). Crews will be mobilized shortly to begin preparations. During the phase II work program, a ground magnetic survey allowed the identification of a major NE-trending magnetic lineament (GG-M-01), a negative magnetic anomaly (GG_M-02) delineated in the SW of the study grid, and a moderate discontinuous magnetic lineament (GG_M-03) striking NE and parallel to GG-M-01. Several narrow, magnetic trends were also successfully mapped thanks to the high-resolution ground magnetic survey. As for the VLF-EM survey, one main relatively highly conductive axis was detected in the NW part of the study grid and four moderate conductive axes in the southern part of the Goose Gold property. All the delineated VLF-EM axes appear oriented NE-SW and some of the anomalous Au assay obtained from soil and rock samples appear to be associated with these conductive axes or located in their path. Management cautions that past results or discoveries on properties in proximity to Spearmint may not necessarily be indicative to the presence of mineralization on the Company’s properties.

James Nelson, President of Spearmint Resources stated, “We are very pleased to have received the drill permit to conduct the maiden drill program on our ‘Goose Gold Project’ directly bordering New Found Gold Corp.’s (NFGC-NYSE) (NFG-TSX.V) Queensway project. Not only do we border New Found Gold, but our Goose property is approximately 1 km from their “Keats Zone” discovery making this one of, if not the closest projects to the discovery. This drill program is funded with flow-through funds on hand which included an investment by certain funds managed by Sprott Asset Management LP. Mr. Sprott is also one of the largest shareholders of New Found Gold. Spearmint also recently announced a major upgrade to our resource estimate in Nevada on our McGee Lithium Clay Deposit, having more than doubled the previous amount of lithium carbonate equivalent (LCE) to 1,369,000 indicated tonnes and 723,000 inferred tonnes of LCE for a total of 2,092,000 tonnes of LCE. We feel the second half of 2022 could have a significant impact for our shareholders.” 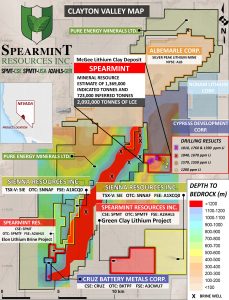 Mr. Frank Bain, P.Geo., a Qualified Person as defined by National Instrument 43-101 has reviewed and approved the scientific and technical disclosure contained within this news release.

Spearmint’s primary projects include three lithium projects in Clayton Valley, Nevada; the ‘McGee Lithium Clay Deposit’ which has a resource estimate of 1,369,000 indicated tonnes and 723,000 inferred tonnes of lithium carbonate equivalent (LCE) for a total of 2,092,000 tonnes of LCE., directly bordering Pure Energy Minerals (PE.v) & Cypress Development Corp. (CYP.v); the ‘Elon Lithium Brine Project’ which has access to some of the deepest parts of the only lithium brine basin in production in North America; and the recently acquired ‘Green Clay Lithium Project’ comprised of 97 contiguous claims totaling approximately 2,000 acres.