Spearmint Commences Operations on its Chibougamau Vanadium Prospects in Quebec

Vancouver, British Columbia—(Newsfile Corp. – November 5, 2018) – Spearmint Resources Inc. (CSE: SPMT) (OTC Pink: SPMTF) (FSE: A2AHL5) (the “Company”) is pleased to announce that it has commenced operations on its Chibougamau Vanadium Prospects located in Quebec. Spearmint’s Vanadium projects border, or are in the direct vicinity of the vanadium deposit of BlackRock Metal’s (private) Ilmenite vanadium project and Vanadium One Energy Corp.’s (VONE.v) Mont Sorcier vanadium project. Vanadium has garnered significant market attention recently as the use of vanadium in battery storage is gaining momentum and Spearmint is very pleased to maintain a significant footprint in one of Canada’s best-known vanadium districts. Vanadium has been the best performing battery metal over the past two years going from under $5 USD per pound to recently reaching an all-time high of over $33 USD per pound. On August 21, 2018, the Government of Quebec announced a $248-million investment in the BlackRock Metals Vanadium Project and the development of the Grande-Anse sector with the total project representing investments valued at nearly $1.3 billion and will create more than 800 jobs during the construction of the mine and mill. (Source: News Release from Office of the Deputy Prime Minister, Minister of the Economy, Science and Innovation and Minister responsible for the Digital Agenda, August 21, 2018, 09:30 EST.) 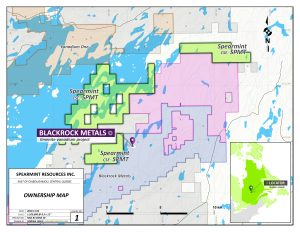 James Nelson, President of Spearmint, stated “As the Vanadium price-per-pound continues to reach all-time highs, recently breaking over $33USD per pound, we are very excited to begin phase one work programs on our Chibougamau Vanadium projects in Quebec bordering Blackrock Metals and Vanadium One Energy Corp. (VONE.v).  In addition to ongoing activity on our gold properties bordering GT Gold Corp. (GTT.v) in the golden triangle of BC, Spearmint has also recently acquired the Hammernose Gold Prospect bordering the strategic alliance between Westhaven Ventures Inc. (WHN.v) & Sable Resources Ltd. (SAE.v) and a district size project bordering Serengeti Resources Inc. (SIR.v) in BC. With ongoing work programs and the recent addition of an IR specialist to increase investor awareness, we expect to be very active throughout the remainder of 2018 and heading into 2019.”