December 8, 2021 – Spearmint Resources Inc. (CSE: SPMT) (OTC Pink: SPMTF) (FSE: A2AHL5) (the “Company” or “Spearmint”) is pleased to announce that it has recently completed a phase II work program on the 100-percent owned “Goose Gold Project” directly bordering New Found Gold Corp.’s (NFG-TSX.V) Queensway project in Newfoundland (see map below). During the phase II work program, the ground magnetic survey allowed the identification of a major NE-trending magnetic lineament (GG-M-01), a negative magnetic anomaly (GG_M-02) delineated in the SW of the study grid, and a moderate discontinuous magnetic lineament (GG_M-03) striking NE and parallel to GG-M-01. Several narrow, magnetic trends were also successfully mapped thanks to the high-resolution ground magnetic survey, in addition a few faults affecting the Goose Gold property were traced. As for the VLF-EM survey, one main relatively highly conductive axis was detected in the NW part of the study grid and four moderate conductive axes in the southern part of the Goose Gold property. All the delineated VLF-EM axes appear oriented NE-SW and some of the anomalous Au assay obtained from soil and rock samples appear to be associated with these conductive axes or located in their path. Follow up work should be completed over these targets to test their extent and potential for gold-quartz veins carrying sulphides. 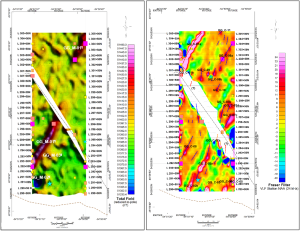 On October 14, 2021, New Found Gold Corp. announced, “The Keats Main zone now extends 530 m down plunge, an increase of 65 m from the previously reported distance of 465 m defined by the farthest intercept to date in NFGC-21-360 grading 61.50 grams per tonne gold over 5.20 m”. These drill results are from their 200,000 m diamond drill program at its 100-per-cent-owned Queensway project, located on the Trans-Canada Highway 15 kilometres west of Gander, Nfld. In addition, On November 24, 2021, New Found Gold Corp. announced that “Mr. Eric Sprott now owns and controls 36,601,200 common shares of New Found Gold, representing approximately 22.4 per cent of the issued and outstanding common shares on a non-diluted basis”. Management cautions that past results or discoveries on properties in proximity to Spearmint may not necessarily be indicative to the presence of mineralization on the Company’s properties.

James Nelson, President of Spearmint Resources stated, “We are pleased to receive the results of our phase II work program on our ‘Goose Gold Project’ directly bordering New Found Gold Corp.’s (NFG-TSX.V) Queensway project. The discovery of a major NE-trending magnetic lineament is an exciting and step towards determining the highest priority drill targets on this project and a follow-up work program will be formulated shortly. Spearmint plans to have two major drill programs beginning in December 2021; one is on the Perron-East gold project in Quebec, located in the direct vicinity of Amex Exploration Inc. and Starr Peak Mining Ltd, and the other major drill program is on our ‘McGee Lithium Clay Project’ in Clayton Valley, Nevada, with the goal to build upon our maiden resource estimate of 815,000 indicated tonnes and 191,000 inferred tonnes for a total of 1,006,000 tonnes of lithium carbonate equivalent (LCE).  With approximately $3 million currently in the treasury, Spearmint is fully-funded for both major drill programs, with no need to raise additional funds.  We are about to enter a major news flow cycle and expect the remainder of 2021 and beyond will be an extremely active period for Spearmint with potential catalysts coming ahead on multiple projects.” 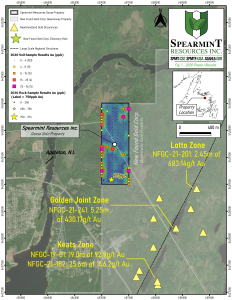 Spearmint’s primary projects include three lithium projects in Clayton Valley, Nevada; the ‘McGee Lithium Clay Project’ which has a maiden resource estimate of 815,000 indicated tonnes and 191,000 inferred tonnes for a total of 1,006,000 tonnes of lithium carbonate equivalent (LCE), directly bordering Pure Energy Minerals (PE.v) & Cypress Development Corp. (CYP.v); the ‘Elon Lithium Brine Project’ which has access to some of the deepest parts of the only lithium brine basin in production in North America; and the recently acquired ‘Green Clay Lithium Project’ comprised of 97 contiguous claims totaling approximately 2,000 acres.