Spearmint Resources Inc. (“SRJ” or the “Company”) (SRJ—TSX.V)( SPMTF—OTCBB) (A2AHL5–FSE) wishes to announce that it has acquired a 100 percent interest in the NEBA West gold-copper project totaling 920 acres. The “NEBA West project” is located in the Golden Triangle Gold District in British Columbia and in the direct vicinity of Aben Resources Ltd. (ABN.v)

James Nelson, President of Spearmint stated, “We are very pleased to expand our footprint in one of the most prolific mining districts in Canada. This new property acquisition is in the vicinity of our existing NEBA project which directly borders Aben Resources Ltd.’s (ABN.V) Forest Kerr property. Spearmint is strategically positioned in the Golden Triangle with several projects bordering, or in the direct vicinity, of significant discoveries. We are working diligently to advance our Golden Triangle projects and are optimistic about what results may be uncovered.” 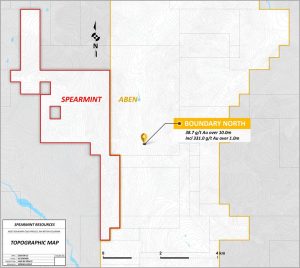